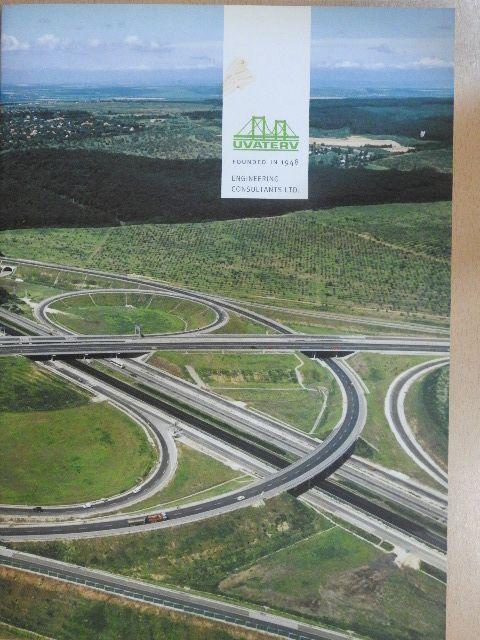 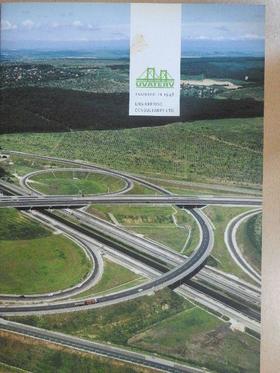 3980 Ft
Részletesen erről a termékről
Bővebb ismertető Termékadatok Bolti készlet Vélemények
Bővebb ismertető
Fifty years ago, in 1948, the wosi iííuslnous experts were 'miled to /oin Ihe state-owned company wfiicfi fiad been founded as a legal predecessor lo uvaterv. Im forming its ideas concerning infrastructure development, each of the consecutive ministries just in charge of transport have been relying upon uvaterv ever since. I( particularly holds true in respect of the national road network and the development of air transport in Hungary, But our company also had a significant role in the planning and design of facilities for both of Ifie remaining sub-branches, such as the rail-bound and water-bound transport. Urban and suburban transport have also been offering a considerable number of tasks. Having a national monopoly, uvaterv employed a great majority of the engineers specialising in this special field, and staffed 2200, by the mid lOies it became one of the lop engineering consultants in EasI Central Europe. The company of 6 engineering departments ifds a workshop indeed, where generations of engineers grew up and received the empirical "post-graduate" training which is essential after having graduated from university. There is hardly any region, or trade-related supervisory, or project management, or contracting, or consulting agency oflhe country where one would not come across with an ex-colleague of ours. The recent decade brought about significant changes. Following the political changeover we turned from a slate-owned company into a company limited by shares (Co. Lid.) as from ls( \anuary, 1993, successfully completing the privatisation procedure in November 1996. The majority of the company shares is in theproperty of the company management and staff. Meanwhile, we succeeded in keeping - now under market circumstances - our leading role in the planning and design for transport infrastructure of our country on the one hand, and our global character on the other hand: even with a reduced staff we are self-sufficiently capable of performing any design assignment. uvaterv is proud oflhe results having been attained so far, in particular, of the road and motorway networks of Hungary, oflhe bridges across both of the rivers Danube and Tisza, of the facilities of the Budapest-Ferihegy international Airport as well as of the metro lines 11 and 111 in Budapest, all of which were implemented on the basis of designs prepared by uvaterv. Our company has always paid a special attention to designing for export. Based on our designs, the full range of transport infrastructure is encountered in 37 countries of the world. Export market opportunities are influenced a great deal by political changes taking place in the world, nevertheless, we would like to continue making good use of our 50 years long professional experience and the professional skill and knowledge of languages of our engineers in our globalizing world as well. The greatest asset of the company lies in the intellectual capital, representedby our fellow engineers comprising more than 50 %of the staff of 200 employed by the company. Im no other way. but through continuous training are we capable of keeping up with the extremely rapid progress taking place in our days. Regular technical training, language education and quality assurance training allow us to keep our engineers' skills at an international level. 30 of our 104 engineers have more than one university degrees, and 33 of them have passed proficiency examinations in various languages. Mostly colleagues with skills mainly in English, and also those speaking German. French, Russian, or Arabic are in charge of the jobs abroad. The development of uvaterv is well represented by the per capita sales revenue during the past 8 years. Although this process is sometimes broken by the annual changes in investment volumes, the increase in productivity achieved by improving the design technology is markedly visible. uvaterv Ltd. is featured by stability in every field. Mosi of our colleagues have been working for the company for a couple of decades. The excellent atmosphere and loyalty are self-evident. Similar safety is provided by the pallern of company assets. We work in head offices of our own. In addition, our company has recreational facililies in Tihany. one a the most famous beauty spots of the country. Moreover, our vehicle fleet and the computer hardware and software belonging to the company represent a considerable value. All engineers working for uvATERV are featured by creativity and constant innovation. The results of research/development activities are proven by our inventions and innovative solutions im every field of engineering. We are using ihe latest cad methods in performing our responsibilities. We are ready for facing challenges of the next century both in thecounlry and abroad so that wecan contribute our work lo the matter of an environment-friendly sustainable transport development. Ownerthlp pallern of Ihe Kempan^ consortium of current managers co-ownership of employees private entiiies shares of employees Spiii el atteli software physical assets invested monetary assets slocks receivables securities ^^ monetary assets miscellaneous Dflnifi of lunds ^^ called up share capital capital reserves ^^ accumulated profit reserve cor^solidated profit Planned Intőmet 11990 = 100 % I overyear commitment inyear commitment inactive accrued and deferred items ¦mill III 800 700 600 1990 t»9i Í99J 1993 1994 »995 »99« 1997 «99«
Termék adatok
Cím: Uvaterv Engineering Consultants Ltd. [antikvár]
Kiadó: Uvaterv Ltd.
Kötés: Tűzött kötés
Méret: 210 mm x 300 mm
Bolti készlet